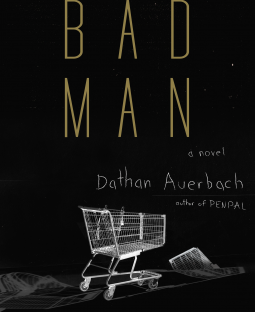 Bad Man by Dathan Auerbach
Published by Doubleday on August 7, 2018
my rating: ⭐️⭐️.5
Goodreads avg: 3.38 (as of 2018-09-17)
cw: child abduction, abuse, fat-shaming, racism/slurs
disclaimer: I received an advanced copy of this book from NetGalley and the publisher in exchange for review consideration. All of the opinions presented below are my own.

Reddit horror sensation Dathan Auerbach delivers a devilishly dark novel about a young boy who goes missing, and the brother who won’t stop looking for him.

Eric disappeared when he was three years old. Ben looked away for only a second at the grocery store, but that was all it took. His brother was gone. Vanished right into the sticky air of the Florida Panhandle.

They say you’ve got only a couple days to find a missing person. Forty-eight hours to conduct searches, knock on doors, and talk to witnesses. Two days to tear the world apart if there’s any chance of putting yours back together. That’s your window.

That window closed five years ago, leaving Ben’s life in ruins. He still looks for his brother. Still searches, while his stepmother sits and waits and whispers for Eric, refusing to leave the house that Ben’s father can no longer afford. Now twenty and desperate for work, Ben takes a night stock job at the only place that will have him: the store that blinked Eric out of existence.

Ben can feel that there’s something wrong there. With the people. With his boss. With the graffitied baler that shudders and moans and beckons. There’s something wrong with the air itself. He knows he’s in the right place now. That the store has much to tell him. So he keeps searching. Keeps looking for his baby brother, while missing the most important message of all.

That he should have stopped looking.

I’ve been leaning into a lot of spooky reads recently and was very excited at the concept of reading a novel written by someone who was so well-known on r/NoSleep. I was a little worried about someone who was used to shorter fiction writing a novel (not that I know much about Dathan’s writing history besides the blurb on Goodreads). Unfortunately, I do think that the length got the best of him in this one.

The start of the book was nothing short of incredible. The more I read, the more I forgot how strongly it had started, so I’m grateful to past me for making note of that. Dathan is clearly a master of crafting atmospheric environments and did a wonderful job of setting up the story. I almost missed by stop on the train and at one point, while reading on my lunch break, I got spooked by someone walking by my desk in broad daylight.

It began to lose me around the 50% mark. I felt like the story was dragging and I didn’t really feel invested in seeing what would happen next. In fact, I’m not sure I would’ve finished the book if it weren’t an ARC that I felt obligated to read and review. Most of the characters other than Ben, the MC, felt really flat and I had no idea what was going on with the plot. There were also these weird inserts between chapters that, while they made sense in the end, didn’t accomplish much except for pulling me out of the story to roll my eyes.

Ben is also fat and there’s a lot of negative, unchallenged fat-shaming (both from Ben himself and others) that doesn’t feel like it has much of a purpose. Part of Ben’s weight is explained by his disability (a permanent leg injury), but it’s hard to tell whether the author is intentionally fat-shaming or is examining internalized fatphobia. Regardless, as I said, it’s not challenged at any point and may be difficult for readers who find that type of content to be triggering.

I will say that the book picks back up and I tore through the last 25% of it, frantic to know what was going on. I wasn’t quite satisfied by the end, but I think it was pretty well-done. It is absolutely horrific and did send chills through me, because it hits on something that freaks me out a lot personally. There were some things that definitely could have been tidied up, but nothing major.

Overall, it was an ok read. I’m right on the fence between “liked it” and “didn’t like it” and am probably gonna stay there. I think I would’ve liked it a lot more if the middle had been trimmed up and if the author had been able to maintain throughout the atmosphere he conjured at both the beginning and the end. If you think this is going to be your thing, I say go for it, but I’m also not anticipating putting this on any recommendation lists.