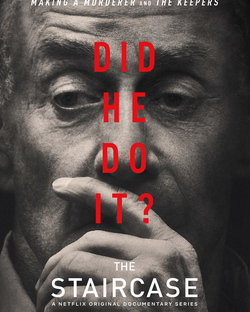 The Staircase begins by setting the scene of a horrific accident: a woman, Kathleen Peterson, who had fallen down the staircase of her own home while her husband Michael was outside, far out of earshot. The emergency services call made by Michael upon the discovery of his wife is downright harrowing and raised goosebumps on my arms. It was clear he was devastated, hysterical even. While I found the story itself to be quite tragic, it all seemed to be rather cut-and-dry to me and I had to wonder how this was worth making a 13-episode documentary about. The Staircase’s biggest weakness is the lack of punch it brings to its beginning. Had I not heard people rave about it, I probably wouldn’t have even continued with the series but I just needed to know why it seemed to fascinate so many people.

While in cases like these it often seems easy to assume the husband is in the wrong, I just didn’t get that feeling here. I was confused as to why the police even thought something was amiss. To be honest, this is something that doesn’t clear up for me as the story continues. While the medical examiner stated that she didn’t find the wounds to be consistent with a fall, I never really understood why. There are conflicting testimonies surrounding this so-called fact and it seemed odd to me that a consensus couldn’t be reached. Without even substantial evidence that this was not the result of an accident, it was difficult for me to turn Michael Peterson into a perpetrator of what could not even be proven to be a crime.

The second episode set my anxiety in motion and made the whole series a lot more personal to me. The prosecution discovers that not only is Michael Peterson bisexual, but that he has had one-night stands with men throughout his marriage. Every person in Michael and Kathleen’s lives had vouched that they had a solid, loving marriage and had never witnessed anything less than pure devotion between the two. For some, this information proves that this was nothing more than a facade; after all, how can a marriage be truly blissful if one of the partners is seeking sexual satisfaction elsewhere? They alleged that this was proof that Michael had killed his wife.

The thing is, Michael shared that while he and Kathleen never explicitly spoke of the matter, there was a silent understanding. She knew he was attracted to men, she knew he sought out men sexually, and she was okay with it. While this seems to come down to whether or not you believe Michael Peterson is a liar, a male prostitute who Michael had solicited is later brought in to testify and seems to confirm this story. He shares that he had been involved with many married men and that most of the time, these men’s wives seemed to know and accept their husbands’ transgressions. He testified that Michael had not only told him the same, but also that Michael spoke highly of his wife and seemed to be deeply in love with her.

I was terrified that this documentary had set out to demonize a bisexual man in an allegedly open relationship of sorts. As a polyamorous bisexual woman, this really hits home for me. Luckily, while that seemed to be the prosecution’s argument, the documentary explored more of Michael’s side of the story and the defense tackled the subject quite matter-of-factly. Sadly, this seemed to turn Kathleen’s family on Michael. They truly believed there was no way Kathleen would have allowed this, that there was no way she could have known. In fact, one of her sisters even says in essence that if Michael could lie to them about being bisexual and sleeping with men, then it isn’t the least bit unbelievable that he could have murdered Kathleen. Statements like this got my blood boiling. While I can understand their point of view to a certain extent, a man not wanting to out himself does not equate to murder.

The prosecution also pulls out another surprise: Elizabeth Ratliff, who had been a close friend of the Petersons when they lived in Germany, died in a similar incident years earlier. While this seems damning in name, none of the evidence supported it as a homicide. The doctors in Germany had ruled this the result of a cerebral hemorrhage — Liz had been experiencing headaches for weeks beforehand and blood was found in her cerebrospinal fluid. The same medical examiner who had announced Kathleen’s cause of death as homicide also said that Liz had been murdered. I already didn’t trust this ME, and most of the evidence seemed to indicate otherwise, so this wasn’t a clincher for me.

There’s a bit more to the series, so I’d recommend watching it if you haven’t already. The above points were what drew my interest the most, though. I also found the “owl theory” quite compelling. Regardless, as Michael Peterson himself said, “Truth is lost in all of this now… This has become a show.” Don’t come to The Staircase looking for answers, come to The Staircase if you have an interest in true crime and the inner workings of the criminal justice system. You are not going to find out without a doubt who killed Kathleen Peterson, but you will see how a (relatively privileged white male) defendant moves through the system.

1 thought on “The Staircase [series review]”