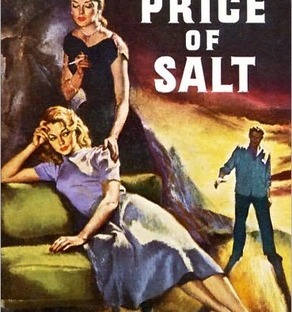 Soon to be a new film, The Price of Salt tells the riveting story of Therese Belivet, a stage designer trapped in a department-store day job, whose salvation arrives one day in the form of Carol Aird, an alluring suburban housewife in the throes of a divorce. They fall in love and set out across the United States, pursued by a private investigator who eventually blackmails Carol into a choice between her daughter and her lover.

While this didn’t end up becoming a new favorite, I was able to appreciate both the writing and the importance of the novel in history. The Price of Salt was written in the 50s and is the book that the movie Carol was based off of. What I was expecting was the development of a relationship between two women with the quietest hints of romance; what I got was a frank exploration of a young woman’s blossoming sexuality.

She wished she could kiss the person in the mirror and make her come to life, yet she stood perfectly still, like a painted portrait.

The main character, Therese, is a 21-year-old sales clerk at the outset of the book. She has a boyfriend who she feels little for and hopes to make a living as a set designer for plays. While working at a toy counter in a department store, she meets Carol, who quickly changes her life. The relationship between these two women was all-consuming and a little bit frightening. Therese is quite unsure of herself and there is a layer of anxiety the reader must wade through as the novel progresses. Therese and Carol eventually embark on a road trip that only enhances their whirlwind romance.

An indefinite longing, that she had been only vaguely conscious of at times before, became now a recognizable wish.

I’ll clarify here that classics and I do not always get along very well; I find the writing style in older books to be a bit more difficult to follow and think that a lot gets lost on me. It’s possible that this is what happened here. I did not understand Therese’s attraction to Carol, other than the fact that she was inexplicably drawn to this woman. I did not understand how she came to love Carol so deeply; to me she seemed quite cold and didn’t have much going for her. While Therese was quite a sympathetic character, I found myself a little lost and didn’t emotionally connect as strongly to the novel as I had hoped I would.

I feel I stand in a desert with my hands outstretched, and you are raining down upon me.

Overall, though, I do think this is worth reading. It is enjoyable to watch Therese find herself, and the book is littered with beautiful prose. Not only that, but it is refreshing to see queer women represented in literature written over 60 years ago. I have yet to see the movie, but am hoping to now that I’ve finally read the book that inspired it.

6 thoughts on “The Price of Salt [review]”