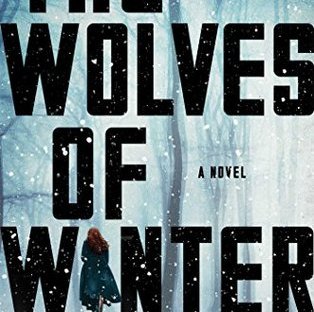 Forget the old days. Forget summer. Forget warmth. Forget anything that doesn’t help you survive in the endless white wilderness beyond the edges of a fallen world.

Lynn McBride has learned much since society collapsed in the face of nuclear war and the relentless spread of disease. As the memories of her old life continue to haunt, she’s forced to forge ahead in the snow-drifted Canadian Yukon, learning how to hunt and trap and slaughter.

Shadows of the world before have found her tiny community—most prominently in the enigmatic figure of Jax, who brings with him dark secrets of the past and sets in motion a chain of events that will call Lynn to a role she never imagined.

I tend to enjoy plague dystopians, but this one was a little different in that it didn’t really focus on the illness itself. It did feel a little different, a little more realistic than most: the “end of the world” really came through a culmination of believable factors rather than one big bad thing. The Wolves of Winter follows one family who has escaped to the great white north in the aftermath of society’s downfall. They are almost entirely cut off from humanity, and live like survivalists until the day a Mysterious Stranger happens by.

Snow is the quietest kind of weather.

As much as I enjoyed this, a lot of it was a bit heavy-handed. The twists are hinted to generously, and are easy to see coming. Lynn’s grief for her father felt overdone and less than genuine. It certainly had its place, but I often felt more annoyed by the repeated references to his death rather than feeling sympathetic or saddened. Aside from Lynn, her parents, and Jeryl, the other characters all sort of blurred together for me. Jax, Ramsay, and Ken didn’t feel like they had much in the way of personality other than just being men — Jax was really only easy to tell apart as the outsider.

I will say that I did like Lynn, but she was sort of the stereotypical one-of-the-boys-and-stubborn-as-nails heroine. My favorite character was probably Jeryl, just because he felt the most lifelike. Thinking about it, though, pretty much all the characters were kind of stereotypes in their own way. The plot itself is also kind of formulaic and I didn’t really end up getting caught by surprise much, although I wasn’t able to predict all of the details and thus was interested in finding out “the truth” alongside Lynn.

“And nothing can happen more beautiful than death,” Walt Whitman says. Fucking liar.

Overall: this wasn’t anything groundbreaking, but it was a fun read and I wouldn’t be opposed to picking up more by this author!

1 thought on “The Wolves of Winter [review]”