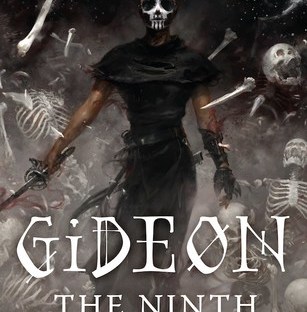 Brought up by unfriendly, ossifying nuns, ancient retainers, and countless skeletons, Gideon is ready to abandon a life of servitude and an afterlife as a reanimated corpse. She packs up her sword, her shoes, and her dirty magazines, and prepares to launch her daring escape. But her childhood nemesis won’t set her free without a service.

Harrowhark Nonagesimus, Reverend Daughter of the Ninth House and bone witch extraordinaire, has been summoned into action. The Emperor has invited the heirs to each of his loyal Houses to a deadly trial of wits and skill. If Harrowhark succeeds she will become an immortal, all-powerful servant of the Resurrection, but no necromancer can ascend without their cavalier. Without Gideon’s sword, Harrow will fail, and the Ninth House will die.

Of course, some things are better left dead.

“Don’t go down there solo. Don’t die in a bone. I am your creature, gloom mistress. I serve you with fidelity as big as a mountain, penumbral lady.”
Harrow’s eyes flickered open. “Stop.”
“I am your sworn sword, night boss.”
“Fine,” said Harrow heavily.

No one is more disappointed than me that I didn’t love this, but there seems to be a pretty firm divide among my Goodreads friends. Some of them love it and some of them seem quite disappointed by it. I hate that I fell into the latter camp on this one. Part of it is probably that this just wasn’t the best time to read it; I just started grad school and have been massively distracted and stressed. But I’m not sure I would have loved this even if I had read it at the best of times.

Gideon is certainly a divisive character and you’ll probably either love her or hate her. She’s obnoxious, annoying, and honestly kind of endearing. It took me a while to warm up to her snark, which had me rolling my eyes at the start of the book but later had me smirking. She’s unapologetically gay as hell and wholly herself and I adore that. Harrow also took a while to grow on me, but I came to love her as well. Their scenes together had me dying after a bit.

The real trouble here for me was the enormous cast of characters. I could not for the life of me tell the necromancers and their cavaliers apart. It didn’t help that everyone was narratively referred to by like four or five different names. There’s a little guide in the front of the book, but that wasn’t much help to me and I would’ve had to take extensive notes had I wanted to really understand. Because of this I was lost so much of the time! I had no idea what the significance of so many events were in part because I had no idea who the hell was participating in each event. I would love certain scenes and feel sure my rating was creeping upward and then would be hit again with something that lost me and made me realize I was not having a great time reading it.

The world-building had me struggling as well. What are the other Houses up to? Where is the Emperor? Who is this big, giant war against? We are clearly seeing the tiniest bit of a giant universe that I know nothing about. I assume that’s in part because Gideon doesn’t know much — that’s why I didn’t have much of a problem with the lack of explanation around magic, which she just kind of knows exists but doesn’t know anything about — but clearly she knows enough to want to go fight in this war against… who?

I dunno y’all, I can easily see how people love this but it was decidedly not for me.

12 thoughts on “Gideon the Ninth [review]”