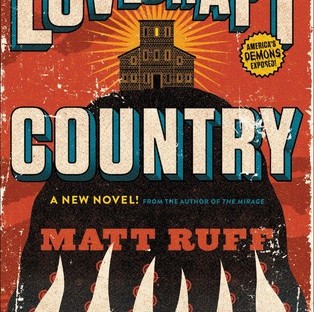 Chicago, 1954. When his father Montrose goes missing, twenty-two year old Army veteran Atticus Turner embarks on a road trip to New England to find him, accompanied by his Uncle George—publisher of The Safe Negro Travel Guide—and his childhood friend Letitia. On their journey to the manor of Mr. Braithwhite—heir to the estate that owned Atticus’s great grandmother—they encounter both mundane terrors of white America and malevolent spirits that seem straight out of the weird tales George devours.

At the manor, Atticus discovers his father in chains, held prisoner by a secret cabal named the Order of the Ancient Dawn—led by Samuel Braithwhite and his son Caleb—which has gathered to orchestrate a ritual that shockingly centers on Atticus. And his one hope of salvation may be the seed of his—and the whole Turner clan’s—destruction.

A chimerical blend of magic, power, hope, and freedom that stretches across time, touching diverse members of one black family, Lovecraft Country is a devastating kaleidoscopic portrait of racism—the terrifying specter that continues to haunt us today.

That’s the horror, the most awful thing: to have a child the world wants to destroy and know that you’re helpless to help him. Nothing worse than that. Nothing worse.

I found myself so drawn into this so quickly, but unfortunately that didn’t last. I thought this would be one continuous story, but it’s sort of more of a collection of interrelated stories that become more fully tied together as the book progresses. The start of the first was a pageturner and so, so eerie but shifted to more of a middling pace and became less outright spooky. I went through bursts of really wanting to read it and others where I was just kind of waiting for the next thing to happen. The characters, though, really made the book. I found them all to be distinct and realistic and didn’t have to worry about mixing any of them up which I usually do with a slightly larger cast.

I had gone in a little nervous about reading a full cast of Black characters written by a white man, but I think Matt Ruff handled this pretty well (I’m not really able to fully speak on this, though). I was pleased to see that at the end of the edition I was reading, he had a recommendation list containing some historical books on the Jim Crow era as well as sci-fi books written by Black authors. It was nice to see him using his platform to lift up others and to point his readers in an ownvoices direction.

Overall, I found this very readable and will likely be recommending it to others!

I am a white woman and my review is written through that lens. If you are an ownvoices reviewer who would like your review linked here, please let me know!