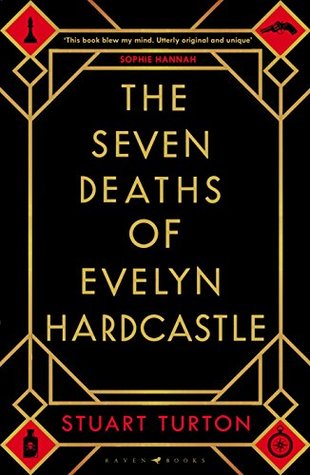 ‘Somebody’s going to be murdered at the ball tonight. It won’t appear to be a murder and so the murderer won’t be caught. Rectify that injustice and I’ll show you the way out.’

It is meant to be a celebration but it ends in tragedy. As fireworks explode overhead, Evelyn Hardcastle, the young and beautiful daughter of the house, is killed.

But Evelyn will not die just once. Until Aiden – one of the guests summoned to Blackheath for the party – can solve her murder, the day will repeat itself, over and over again. Every time ending with the fateful pistol shot.

The only way to break this cycle is to identify the killer. But each time the day begins again, Aiden wakes in the body of a different guest. And someone is determined to prevent him ever escaping Blackheath…

This was fine. It’s honestly a struggle for me to write a review because I have next-to-nothing to say about it. It’s a shame because the beginning of the book had me pulled right in. I really wanted to know what was going on and who our main character was. The whole thing just gets pulled in so many different directions that there are almost too many mysteries to solve and I kind of stopped being invested in any of them. The reveal about why Aiden is at Blackheath was a bit out of left field and not expanded on enough, I was left feeling like I had been given a cop out explanation with no context. The biggest problem with this novel was that too much time was spent on things that I didn’t care about and too little time was spent on things I did care about.

I also didn’t really like the hosts who Aiden inhabited. He had only male hosts (I’m almost positive? I read it over such a long period of time.) and I think it becomes pretty obvious that this was written by a man. Aside from the general vibe of the writing, there was the way Aiden reacted to his hosts. In the body of an overweight man, Aiden became horribly disgusted and I was honestly horrified at his reaction. All he can think about is how awful this man is and how ashamed he is to be in this body. As Hannah points out in her review, this is then juxtaposed with a later host who is an actual rapist and who Aiden feels revulsion towards, but not nearly on the same level as he felt towards his fat host. This may be a controversial take, but only a man could think that being overweight is worse than sexually assaulting women on a regular basis.

I’ve honestly changed my rating several times already. Upon finishing, I figured 3 stars described how I felt about the book, but after a bit more thought, I decided that 2.5 would be closer. Writing this review, though, I need to bump it down to 2 stars. For me, 3 means “liked it” and 2 means “didn’t like it” and I just didn’t like this book. I didn’t feel satisfied with the answers I was given, I didn’t care much for the characters, and I immensely disliked the way Aiden’s different hosts were portrayed.

I may be alone on some of this and I think that if these items aren’t dealbreakers for you, you should give it a shot. Unfortunately, this book just didn’t work for me.